Throwing a pair of dice, flipping a coin and shuffling playing cards are all examples of random number generators (RNGs) or random number draws. While some of these devices have been around for thousands of years they can be time consuming if you are trying to get a large sequence of random numbers. 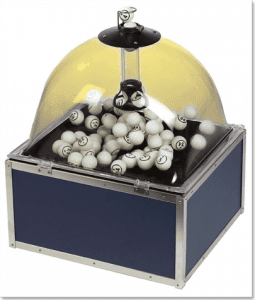 That is why the computational RNG was created and most government lotteries and slot machines use these over mechanical number generators these days.

From the late 1970s computational RNGs were met with scepticism by the public who believed they could be manipulated. But the Yarrow Algorithm and Fortuna (PRNG) among others played a large role in the public becoming more accustomed to computers hijacking their draws and giving a fair result.

Electronic pokies contained the first RNGs in Casinos. The RNG was contained on a computer chip and allowed the machine to produce random numerals without the need for mechanical pokie reels. This allowed the pokies to evolve into what they are today.

From a bingo perspective, computational RNG’s are slowly stamping out the physical ‘Blower’ (pictured above) but in many country towns you will still find one of these relics in the bingo hall.

RNG’s in the Game of Bingo

Bingo is a game where players have a card with random numbers on it. The player has a certain amount of numbers on their bingo card and then a caller randomly generates numbers. Generally, the bingo caller is a character with cries of “Legs 11” and “Unlucky for Some 13” part of the bingo vernacular.

The player is hoping to get a specific pattern on their card from the numbers given to them by the caller, who generates them either on computational or physical RNGs. When a player successfully obtains the required line or pattern, they call ‘bingo’ and the game is effectively over.

A random number generator is basically a complicated algorithm or physical device that produces a random set of numbers. If we’re talking about computational RNG’s, each number generated by this method is actually produced by the key or seed of the algorithm.

Each required outcome is given its own number designation, in lay men terms and specifically for Bingo this means each number is given an equal chance of being drawn. It’s the same as if we were using a physical device to do the draw. Picture a bucket of balls with numbers on them and someone picking balls at random out of the bucket. This is basically what the computational RNG is doing.

Spotting a pattern in a Random Number Generator would even be too much for an army of mathematicians even though the generated numbers are from the seed or key number, which in theory means the numbers are not truly random and will repeat eventually.

There have been cases of lotteries and bingo games having their physical RNGs tampered with, this is usually done by weighting balls or distinguishing a ball from the rest. That is why each state and territory in Australia has laws governing bingo and lottery draws.

In Victoria, bingo halls are licensed by the Victorian Commission for Gambling and Liquor Regulation and must meet certain criteria, including following the guidelines set out in the Gambling Regulation Act (2003). Third party regulatory bodies like this play a large role in making sure players are playing in a fair environment.

How Do I Know My Bingo Game Isn’t Rigged?

If you’re attending a bingo hall chances are the people playing there have been doing so for years and can vouch for the integrity of the game being played.

A bingo licence in Victoria will only be issued to a community or charitable organisation. This stops unauthorized games from popping up all over the place. If you arrive at a bingo hall and have your doubts about the legitimacy of the operation ask to see their licence papers. You cannot run a bingo game in Victoria unless you hold a bingo centre operator’s licence which is issued by the Victorian Commission for Gambling and Liquor Regulation.

NB: Each state and territory in Australia has different laws and licensing regulations regarding Bingo. Be sure to check the laws in your state before playing bingo.