What is the probability of winning bingo?

Like most forms of gambling, bingo is ultimately about luck. But while there is no sure-fire way to win, there are few things you can do to increase your chances of success – whether playing online or in a land-based bingo hall. Let’s look at how bingo odds work and how you can gain a slight edge on the rest of the competition.

Whereas casino games like blackjack and baccarat are played against the dealer, bingo is all about beating your fellow players. Thus, whether you’re playing 90-ball housie or one of the myriad 75-ball American variants, there is no fixed house edge in bingo. 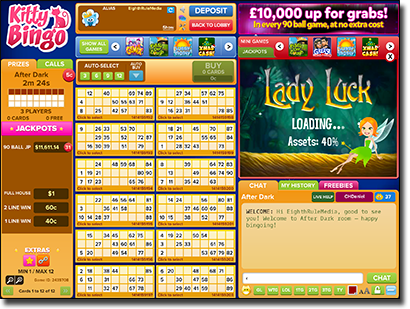 So, how does one calculate their chances of winning? One view is that you simply count all the active players in the room (including yourself) and divide one by that number. For example: if there are 57 players in a session, your chances are 1 in 57 (or 0.01754386).

This method is highly inaccurate, because it assumes that each person has the same number of bingo cards in play. The more tickets you have, the better your chances of winning – just like the lottery. However, unless you go around and ask every player how many cards they’re playing per game, it is very difficult to quantify your probability of success in this way.

What you can do, though, is look at the mathematical likelihood of completing lines, patterns, or full cards within a certain number of calls. Knowing these numbers won’t increase your odds of winning, but it’s always good to learn the facts and figures when you gamble with real cash.

Each ticket in Australian bingo (aka housie) contains 15 numbers, arranged in three rows of five numbers each. The table below illustrates the chances that one line (five numbers), two lines (10 numbers), or a full house (all 15 numbers) will be marked on any given ticket within x amount of balls being drawn. As you can see, the probability of getting all 15 numbers in as many calls is as good as zero.

US bingo differs significantly from the version played in Australia, New Zealand, the United Kingdom and South America. Cards feature 25 squares in a 5 x 5 grid, each containing a number – except for the free space in the centre.

Rather than marking off the whole card or straight rows of five, 75-ball bingo games can be played with a wide range of special patterns. That fact, combined with the free space, means there are hundreds upon hundreds of statistical possibilities to consider.

Below are a few simplified tables to give you an idea of how the numbers stack up for the most basic American bingo patterns. All figures are calculated assuming patterns may be completed on or before the last ball drawn.

Five numbers in a horizontal, vertical, or diagonal line.

Two lines of five numbers each, in any direction.

Three lines of five numbers each, in any direction.

All 24 numbers on the card.

How to improve your chances at online bingo

Although you can’t change the raw statistics of real money bingo, you can try one or two things which might give you an edge on your fellow players. While some of these tips only apply to land-based housie games, most of them can also be very useful in online bingo rooms.

– Buy the best cards, and plenty of them. Australian bingo centres often run discount prices on bulk packs of tickets, as do a few of the better housie websites. If there are different kinds of bingo cards available for the same session, take note of what everyone else is getting.

– How many people are you playing against? The smaller the field, the better your chances of winning. That massive bingo jackpot might not be such good value if the room is packed to the rafters.

– Look for smaller jackpots and PJPs. The biggest cash bingo prizes draw enormous crowds. A lesser jackpot may not give you that life-changing win, but you’re much more likely to clean up when there is less widespread interest. Try some online progressive jackpots (PJPs), especially those which have been won fairly recently.

– Compare the field. Are you winning more at one bingo site than the other? Which particular sessions are the best value for money? Which online housie operators have cheaper tickets, bigger prizes and fewer players? Make sure you’re getting the best deal possible.