It’s the Chinese New Year and we’re ready to celebrate all things lucky – and, of course, share with you the best bingo promotions the Chinese festival brings in 2015.

The Chinese New Year falls on the Thursday, February 19 but the celebrations go all week so we can expect to see bingo sites taking the most of the festivities. It sees the year of the sheep taking over from the year of the horse and according to the Chinese Zodiac the sheep, also known as the goat or ram, is the animal people like most. We have decided that because we like being lucky when playing online bingo, then this is the year of being lucky at online bingo.

We’ve searched our favourite online bingo websites to see who is celebrating the Chinese New Year and who isn’t, and have compiled the best promotions players can access for the week.

Lucky Pants Bingo is getting into the spirit with their very own Chinese New Year Promotion from February 16 – 22.

Combining the year of the sheep icon, and the lucky Chinese number eight, Lucky Pants Bingo have created a game which sees either 44,000 points or a $10 voucher to be won. All players have to do is get bingo on the number eight, the sheep pattern, and the pattern eight to win. The $10 voucher will go to the person who hits bingo the most times with the aforementioned rules, while the points will go to the remaining top 20 players.

Lucky Pants Bingo also have a Slots Tourney available to coincide with the Chinese New Year, with $100 in cash and $200 in bonuses for the slots to be won. Just play the Chinese New Year, Double Dragon, Lion Dance, Ninja Fruits and Sumo kitty slots for your chance to win these prizes. The $100 will be shared between the top 10 players while 30 runner up slots players will share the $200 in bonuses.

Kitty Bingo is the parent company of Lucky Pants Bingo so it is only natural they want to celebrate the Chinese New Year with their kids. With the theme of luck from February 12-22 you will see seven days of luck. Once again we have missed the past few days but there is still plenty of time to get amongst the celebrations.

The top 50 players who bet the most on their bingo games will take a share of the 100,000 points and the top six lucky bingo players will win themselves a Maneki Neko black cat with the happiness card and stand included, which to be clear is a a toy that is said to bring luck to the owners.

Additionally there is a slots bonus of 1000 free spins for the top 50 who players who bet the most on Wu-shi Lion Dance, Jewel of the Dragon, Ninja Fruits, and Chinese New Year slots. The top player will receive the Maneki Neko Black cat too.

Join now and new players will get to play free 90 ball bingo in the newbie room from 8am to midnight every day for seven days which is fitting for the Chinese New Year. However, this can’t be used in conjunction as you aren’t making a bet, but you can play multiple games at once for the week.

While this promo isn’t Chinese New Year specific, it is the perfect promo to play this weekend which happens to be during the Chinese New Year festival. Get a team of friends together this Saturday and Sunday and celebrate the festive occasion by playing bingo with your mates from 7pm to 9pm.

With over $4500 in prizes to win you’ll be celebrating more than just the year of the sheep if you’re lucky. If you are looking for friends to celebrate with, Aussie Dollar Bingo will put you in a team so you don’t have to form one yourself. Each player will need to buy in at $27.88 ($25.00 plus the registration fee of $2.88) by 6pm each night.

The price covers the automatic pre-buy cards for the tournament. The entire buy in by all teams is divided by the three winning teams at the end of the night with first place winning 50%, second place winning 35%, and third place winning 15%. There’s also bonuses just for registering your team.

Bingo Australia celebrates the Chinese New Year in their own way 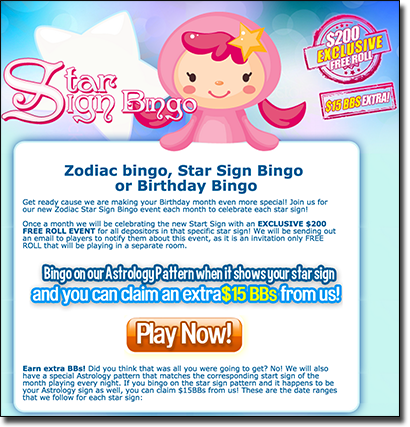 While Chinese Zodiac signs are somewhat different to Zodiac Star signs, we feel that this month we can celebrate both and at Bingo Australia bingo players with the star sign Aquarius for the month of February just got very lucky. But Pisces players aren’t going to miss out either, granted they’re patient.

If you’re born in February and you can get bingo on the Aquarius star sign then you can claim $15BBs by sending a CS ticket with the game ID. Since there isn’t many days left in February, Pisces players can get excited for the upcoming star sign change and the event at bingo Australia that comes with it.

For Pieces bingo lovers, all you have to do is wait until the end of February and on the first day of March, players will be invited to a special $200 free roll event via an email invite and will get to play 10 free games which carry a $20 JP. It kicks off at 8pm, March 1 for those born a Pisces. The games are played in a separate private room

If you are worried your birthday information isn’t correct, head to the profile section and update your information. Happy Chinese New Year!