Australian bingo players can take advantage of heaps of special promotions at our top-ranked gaming sites this March, with lucrative raffle draws and guaranteed cash prizes up for grabs all month long. Here’s the pick of the bunch.

This unique promo pays tribute to Australia’s iconic “big thing” landmarks – such as the Big Banana in Coffs Harbour, the Big Merino in Goulburn, the Big Prawn in Ballina, the Big Orange near Berri, and the Giant Worm on Victoria’s Bass Coast. 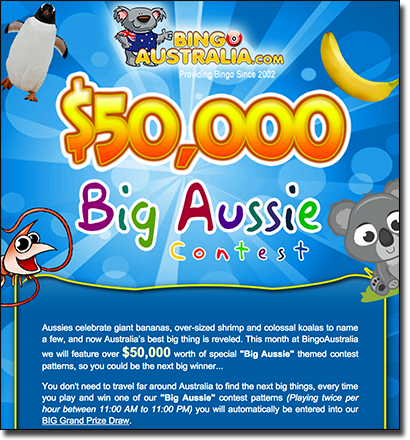 Throughout March, BingoAustralia.com is offering some AUD $50,000 in prizes through a number of special Big Aussie Contest patterns. These games will run twice an hour, between 11:00 AM and 11:00 PM, every day until the end of the month.

If you win on one of the promo patterns, you will go straight into the running for a guaranteed AUD $1,000 cash grand prize. The draw will take place on April 2, 2015.

For those who like to play real money pokies, Bingo Australia is also hosting the Big Aussie Winner Takes All tournament.

This is a weekly online pokies contest where each win gets you one point towards your leaderboard score. The top 10 players at the end of each week will win real cash, BingoBucks and entries into the Big Aussie grand prize draw for April 2.

Every Internet slot game at Bingo Australia is eligible for this competition, including highly acclaimed BetSoft 3D pokies like Madder Scientist, Mr. Vegas, A Night in Paris, True Illusions and Rockstar.

The Big Aussie Contest promotion is open right now and runs until March 31, 2015 at both www.BingoAustralia.com and www.AussieDollarBingo.com.

Win-Win Wednesdays run every week at LuckyPantsBingo.com and KittyBingo.com – two of the very best real money bingo sites for Australians, and not least because of their super range of monthly promotions.

Prebuy your bingo cards for just $0.20 a piece at Lucky Pants or Kitty Bingo and head to the Win Win room at 9:00 AM (AEST) to play for a share of $200 in prize money. There are three cash prizes on offer:

Now, here’s the beauty of this promo. If you don’t win in any category, you get your money back in full. That’s why they call them Win Win Wednesdays – because even when you lose, you don’t really.

For more online bingo promotions running through March and beyond, check out Pandora’s Mystery Box, the 500% Bonus Booster and the $10k Slider events at www.LuckyPantsBingo.com and www.KittyBingo.com.

On the last Saturday on the month (March 28), True Blue Bingo will give Aussie housie players the chance to win a share of AUD $10k in cash prizes.

This lucrative 90-ball bingo event will run at 10:00 PM (AEST) in True Blue’s Grapevine and Snickers rooms, with four big hauls up for grabs:

The following day (Sunday, March 29) will see the big money return to the Snickers and Grapevine rooms with the $2000 Nest Egg promotion. Top prize is $700 for a full house, while two lines gets $400, first line gets $300 and the consolation comes to $600.

Both of these True Blue promotions must be played with real cash (no Bingo Bonus credits allowed) and come with a two ticket minimum purchase. See www.TrueBlueBingo.com for more details, and to read up on other promos like the $500 Monkey and the Rio $1000 Weekend.