The history of bingo

While the core concept and rules of the game of bingo are relatively straight-forward compared to other popular casino and lottery games, you’d be surprised to find out just how complicated the development of the modern-day game we know today was.

While the origins of bingo are date back hundreds of years, these days the game has been popularised online and developed into a multi-million dollar business.

Origins of the Game

The inception of bingo traces its roots back to the 16th century – specifically in 1530, Italy, where it was once a state-run lottery known as ‘Lo Giuoco del Lotto D’Italia‘ – a game still played by many Italians and which has been successfully organised and run almost every Saturday to his date.

In this original version of bingo, there were tokens numbered from 1 to 90, and the player’s single playing card was divided into three horizontal rows and nine vertical rows. Every horizontal row had five numbered squares and four blank spaces organised in a random arrangement, while the vertical rows had numbers from 1 to 10 in the first row, 11 to 20 in the second row, and so on, up to 81 to 90 – to ensure no two lotto cards were identical. Once a game was organised, 90 numbered chips would be put into a small cloth bag for the lotto callers running the game. The designated caller would then draw a numbered chip from the bag, often with a wooden spoon, and announce the number aloud. If players had that number on their card, they would cover it – and the first to cover all of their five numbered boxes in a whole horizontal row would win the game, and subsequently, the prize pool money.

At present, the Italian State Lottery continues to not only be a popular game among the citizens, but is also a big part of the government’s annual budget – with 75 million dollars coming in yearly.

Soon enough, this popular game made its way to France and Germany centuries later and, as expected, began to be shaped into something new and completely different.

In the late 1770s, Lo Giuoco del Lotto D’Italia made it to France. The French version became to be known as “Le Lotto“, and gained popularity with French nobility and wealthier members of society – smallfolk were too poor and considered too low on the social ladder to play. The rules were practically identical, save for a few term changes unique to the language. 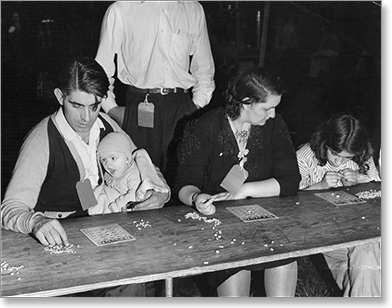 A little less than a century later in the 1850s, a similar type of Lotto game in Germany exploded in popularity. Based on the Italian and French bingo games, it was unique for being educational in nature. Parents and teachers would use the game, with a layout like multiplication tables, to help children learn math.

While prominent enough, it was the French version which made it to Britain and the U.S, and which would explode in popularity in the 20th century.

During World War II, ‘Le Lotto‘ underwent several more transformations which proved popular with British soldiers, who played when off-duty in the barracks, or when under fire in the trenches. This variation gained its own name, ‘Housey-Housey‘, and had tickets with five numbers each on nine columns and three lines.

In the latter years of the conflict, fellow U.S. soldiers took the game home with them, and it was by the influence of Edwin S. Lowe, a struggling entrepreneur and toy salesmen from New York, who popularised the modern-day bingo game. In 1929, Lowe encountered the game of ‘Beano‘ being played at a country festival in Jacksonville in Atlanta, Georgia – the name referring to the dried beans players used to mark their cards when successful numbers were called out.

The game was played on a horseshoe table, with beans and numbered cards spread out over it and a pitchman who announced each number from a cigar box. Once a player covered a diagonal, horizontal or vertical line of numbers on their card with their beans, they would shout “Beano!”, and a prize doll would follow.

The booth where the game was being played was packed full of people scrambling to play, and Lowe correctly observed the game could be a hit. He inquired about its creation, and was told by the carnival pitchman that he had seen the game played in Germany and made his own modifications to it to become Beano.

The Emergence of Bingo

Impressed with the game’s popularity, Lowe took the idea back with him to New York City and set up his own game with cardboard, a rubber numbering stamp and the iconic dried beans. Playing a game with friends and acting in the pitchman’s role, his peers also expressed excitement with the new game, and when one of his female friends covered all lines on her card, she shouted to announce her win – but incorrectly shouted “Bingo!” instead of “Beano!”. The name stuck.

Lowe ended up using – but not copyrighting – the bingo name once he perfected his two rule variations – a twelve card set for one dollar and a twenty-four card set for two dollars. Lowe’s company experienced great success when the game found its feet, especially in local catholic churches, where it was used for community fundraisers and to draw huge crowds at other social events. 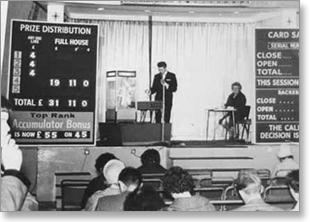 After a degree of success, Lowe approached a senior mathematician at Columbia University, Carl Leffler, and requested he create 6,000 new Bingo cards with non repeating number groups – with the agreement that the professor would be paid per card. Leffler experienced great difficulty in completing his task, but once finished, Lowe’s company experienced even greater success, and had to create the first official Bingo Instructional Manual and monthly news letter (‘The Blotter‘) to keep up with increasing curiosity and demand.

Eventually, Lowe’s company organised a game packed with 60,000 players in New York – 10,000 people were turned away at the door. This solidified the game’s popularity in the U.S. However, once it was in the public domain, several imitators and like-minded entrepreneurs also began creating their own variations to capitalise on the success of Lowe’s company, and bingo spread globally like wildfire.

Since the 1960 legimisation of social gaming by the British Betting and Gaming Act, the name of ‘Bingo‘ became adopted in Europe, but the original rules of 90-number games remained. Around this time, the game of bingo was organised and played in its own dedicated bingo halls, rather than the carnivals, churches and cinemas it was once limited to.

At present time, bingo is playable across the world and is still particularly popular in communities and countries with Catholic and Christian missionaries and churches. As online gaming and subequent Internet bingo has taken off, the game continues to spread to wider audiences.