Bingo typically refers to the lottery game we have become accustomed to playing in clubs and halls – 90-ball bingo in Australia is the main game of choice, while in America 75-ball bingo is most commonly played. There have been many variations based on this long-established game of chance, including several games involving playing cards. In this article we will discuss some of the most popular variants of bingo: the card game.

How to play classic card bingo The most basic form of the game, and the most commonly played, is the version with two standard 52-card decks. This game can have up to 10 players (at least four), including the caller. The caller can simply call out the cards and not partake in the actual playing, if so desired.

Depending on how many players, the number of cards dealt to each participating member can be slightly altered. We want to evenly distribute the cards, leaving the minimum possible amount left over:

Once all cards have been dealt face up to each player, the caller uses the other 52-card deck to begin calling out single cards (value and suit). Whoever has the matching card must make this known to the caller, and can then turn that card face down. The player who turns all of his/her cards face down first is deemed the winner.

The same format as detailed above can be played based on just the value of the cards called out – with the suit of the card ignored. This means players can turn over multiple cards of the same rank at the same time (if a King is called and they have two Kings, for example), and also means two or more players could win simultaneously, resulting in a shared win.

The two styles described above can be played for money, with an agreed amount (for example, $1 or one chip each) placed as an ante by each player prior to the game’s commencement. The winner/s claim/s the entire pot (or split the pot), and then the same process is repeated for the next round.

The below variations to the traditional game lend themselves to some more entertaining betting styles.

This format works best with around three to five players, uses one standard deck of 52 cards, and is concerned only with card rankings, not suits. 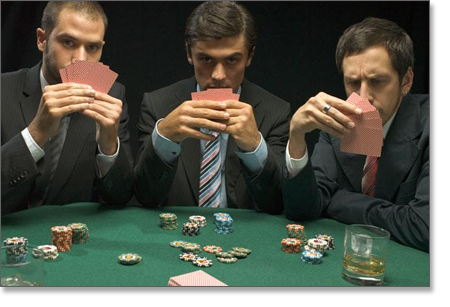 Before the deal, each player puts an agreed amount of cash in to the pot. Each participating player gets dealt five cards which only they are permitted to look at, and 10 face down community cards are dealt to the middle of the table. If a player by chance has a hand with four of the same valued cards, all cards are recollected, reshuffled and dealt again.

Once by one, the dealer turns over the community cards in the middle, and players discard any matching valued cards face up in front of them. If the dealer turns over a community card with a value/rank which has already been turned over, further cards from the unused portion of the deck are dealt, until a card of a new rank appears. Play continues as normal, reverting back to the next card in line of the 10 community cards. If that next card is also the same rank as another previous card, the same format detailed above is followed.

Once a player has discarded all five of his/her cards, he/she can shout bingo, and after checking all cards match, is deemed the winner. All other players must put an additional stake in the pot for every card they didn’t discard, and then the winner collects the entire pot.

If 10 different ranked cards are revealed and no one has won (quite possible), each player must pay one stake per each uncalled card (i.e. if you have three cards left over, you must pay three chips – assuming the ante was one chip). It can also be agreed that each player pays an additional stake to see the next new deal.

Now, we have two options (one of which should be decided upon before commencing the game):

If option one is selected, the game carries on as per usual and whoever discards all their cards first wins the entire pot. It is possible, while highly unlikely, that the entire deck is dealt without a winner. The dealer could technically keep dealing rounds of 10 cards, until all possible ranks are on display, while multiple players could be holding four cards of the same rank which can’t be displayed as community cards. If this happens, revert to option two and begin the game again, while still making each player contribute one ante per each uncalled card (and an additional ante to see the deal) following each round of 10 cards.

Note: A round of 10 cards does allow for more than 10 cards to be dealt, as chances are at least one card will have the same value of a previously displayed card.

Option two simply rules that there is no winner for that round, regathers all cards and begins the game again, while also forcing players to contribute one stake per each unused card, and a stake to see the new deal. This continues until a winner is found.

Whichever option is chosen, once a winner is found, that player claims the entire pot. If the game is drawn (multiple players turn over their last card at the same time), the pot is split evenly.

This version can be played without multiple rounds of 10 cards: the dealer can deal the first round of 10 cards (including any repeats), and if no-one wins, additional stakes are added for each player’s uncalled card, and the dealer deals out the rest of the deck until we have a winner. In most cases, no more than two rounds will need to be played, anyway.

Bingo with a Jackpot

This version is similar to the ‘paying for uncalled cards’ version, however two standard decks of cards are used, and there are two pots – a main pot (one ante), and a jackpot (two antes). Both decks are shuffled together and players are dealt six cards each. 12 cards are dealt face down in the middle of the table – the jackpot pile. The dealer must draw a new ranked card from the unused deck if any of the 12 jackpot pile cards match in value.

If a player matches all six of his/her cards with the jackpot pile, that player claims both the main pot and the jackpot. If no players have matched their cards after all jackpot pile cards are revealed, the dealer continues to draw cards until someone discards all cards and shouts bingo. This player wins the main pot, while the jackpot carries over to the next round. If the deck is exhausted and no one has called bingo, both pots carry over to the next round.

One ante from each player is put in for the new main pot, and two antes are put in by each player for the new jackpot. If two or more players call bingo on the same card, the pot/s is/are shared.

The following style of card bingo takes a different approach, is thoroughly entertaining and does involve some skill. One standard deck is used, and players place an ante before being dealt the same amount of cards as the number of face-down community cards dealt to the middle (usually five). The cards are turned over one by one, with a betting round after each exposed card. Players discard any of their cards which equal the value of the revealed community cards, and whoever gets rid of all their cards first calls bingo and wins the pot. If no one calls bingo, the winner is determined by the adding up the value of each player’s remaining cards:

Deuces through to 10s are ranked at face value, while you need to agree on the following prior to commencement:

Here you play with two standard decks shuffled together (suitable for a larger group of players), and you must place an ante before the deal. Players are handed five cards each, and five common cards are dealt face down in the middle, turned over one by one (betting after each revealed card is optional – decide if you wish to do so before starting the game). If a player discards each of his/her cards, he/she wins the pot, but if no one does so, the pot is split between the players with the lowest and highest valued hands of their remaining cards. Again, you need to decide on the value of the cards before you begin.

With so many versions of the classic card game, you can easily combine elements from one game to another, forming a hybrid version for a style that best suits your play. All standard decks should exclude Jokers.